After our Beer Quest Adventures, we thought it might be a good idea to give the Weiße a rest and check out some culture.

We leave the hotel at 9am, and walk out into a bright sunshine-y empty street. Dead silent – no cars, no people… Weird. We hop on the suspiciously uncrowded U-Bahn. I check my phone – it’s definitely Thursday and it’s definitely 9:10am. Hmm. We board a tram at Karlsplatz with only two others, winding north through quiet streets. Strange… We get off the tram and walk past closed shops towards Vorstadt Cafe where we’re catching up with my friend Ruth for breakfast. Ruth can solve the mystery for us! Has there been an apocalypse? No! It’s the Corpus Christi feast day, and a public holiday. Apparently in Bavaria, they celebrate all the Catholic public holidays, plus the national public holidays. That makes me feel less indulgent for enjoying a public holiday for a footy parade.

From the cafe, it’s only a short walk to the Englischer Garten and the Haus Der Kunst. 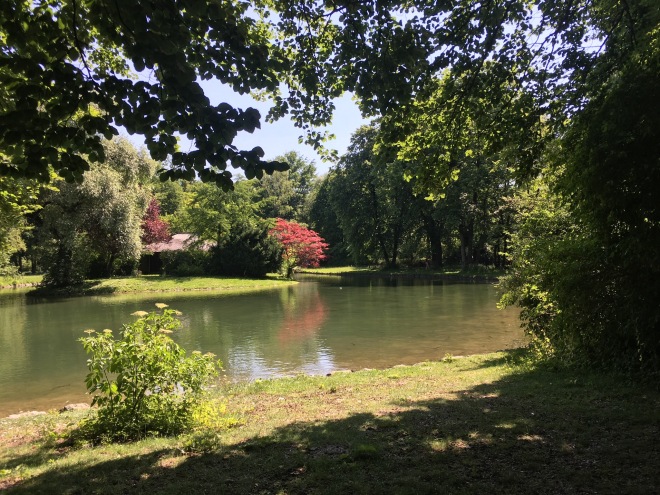 At the Eisbach, a man-made channel in the Englischer Garten, surfers take turns riding the wave that forms in the stream. 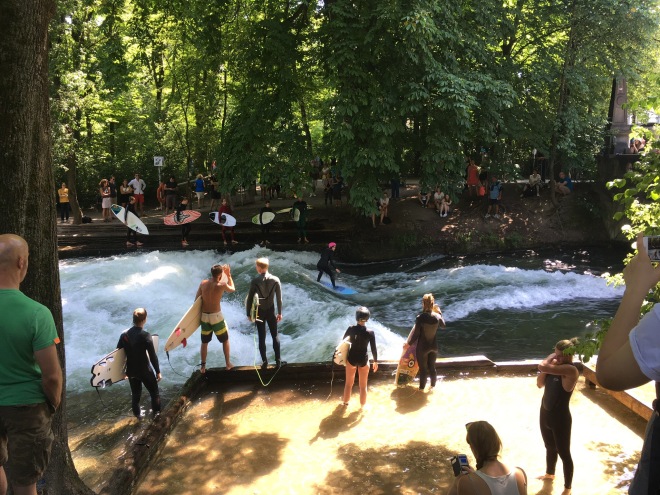 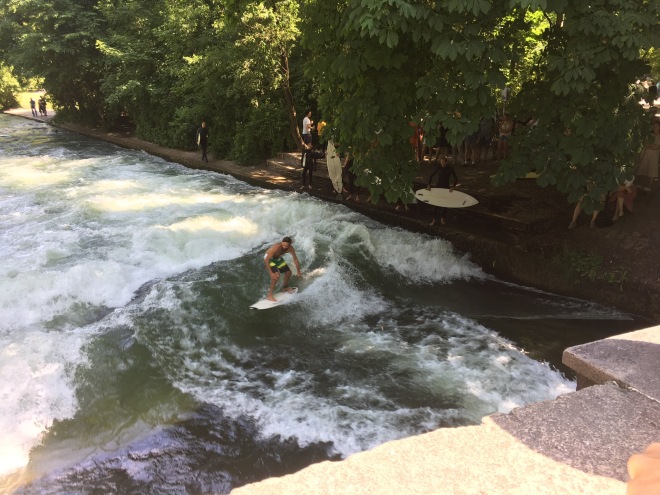 To the Haus Der Kunst!

Commissioned in 1933 by Hitler and then known as the Haus Der Deutschen Kunst, it was to house Hitler-approved German art. This would contrast with the unapproved and confiscated “degenerate” art. After WW2 ended, the “de-nazification” of the building began. Now it houses all sorts of interesting degenerate modern art! The ticket man did check whether we knew it was a modern art gallery – apparently some visitors don’t, get confronted and start complaining. There were no photos allowed in the main galleries unfortunately, but I did like taking photos of the fossils in the marble staircases…

We had lunch on the terrace, which was lovely. It turns out we were sitting next to the director of the gallery, Okwui Enwezor… who knew?! Not us #artnoobs

On the way back to Odeonsplatz, we made a quick stop at Viscardigasse. This is a small alley which runs behind the Feldhernhalle. A meandering trail of bronze-painted cobblestones remembers those who used this alley to avoid passing the Nazi guards stationed at Feldhernhalle, which was, at the time, memorialising Hitler’s Beer Hall Putsch. By cutting through the alley, dissenters could avoid saluting the Nazis.

So this was our last day in Munich! It was an interesting city, and I loved all the green space. I asked Rob what he liked most about Munich – he said beer is the obvious answer! But also enjoyed its relaxedness and its well-integrated cycling culture and public transport 🙂